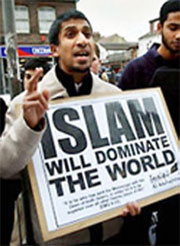 Islam is self-proclaimed to be “the religion of peace,” and in our uncompromising quest for political correctness we deny ourselves the merest observation that “they” may be different from “us” in any measurable respect. Indeed, as Muslims walk the streets of western countries they do so in relative equality, and to the extent they are polite and attempt to blend with the local populations, they are welcomed as fellow citizens of the world, and extended the hand of brotherhood.

Each of us is free (as of this writing) to see the world from his own view, and we would hope that true bigotry, religious or otherwise, would not be condoned in any civilized society. However, there is a growing elephant in the room, and at some point one of us is going to have to point it out and we will all have to discuss it.

The Federalist Press editors enjoy many connections with friends and associates in Europe, and for years have listened with growing concern as anecdotal stories of increasing troubles with Muslim immigrants have been shared. Political correctness has run completely amok in Europe, and leftist governments and their state controlled media are loathe to admit that Muslim immigrants have gotten the best of them.

Indeed, as Muslim populations swell in Western countries we find certain patterns emerging—patterns which we are beginning to see in the Western hemisphere as well.

As the emphasis on marriage and the traditional family in Western countries has diminished, and the practice of abortion has increased, native local populations have sputtered.

Few seem to understand that the Fertility Rate (FR) of most of Western Europe has fallen below 2.11—the point of sustainability. A rate of 1.8 is considered extremely difficult to recover from, and 1.3 is nearly impossible. At this rate a culture will simply fade to oblivion. As of 2008 these are the Fertility Rates of a few European nations: France-1.8; England-1.6; Greece-1.3; Germany-1.3; Italy-1.2; and Spain-1.1. The average FR in 31 European Union countries is 1.38. 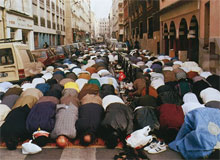 So why is the population of Europe growing so rapidly? Muslim immigration, and Muslim Fertility Rates.

For example, France’s FR of 1.8 is offset by the Muslim FR of 8.1. In fact, the south of France now has more Islamic Mosques than Christian churches. Also, 30% of its children under the age of 21 are Muslims, and the number climbs to 45% in large cities. At these rates, France will be an Islamic Republic within a generation.

In the Netherlands 50% of all newborns are Muslim, and in 10 years the population will approach 50% Muslim. These numbers hold true in Belgium as well.

England, where Muslim men were just discovered to be running sex slavery rings of local white girls, has seen a 30-fold increase in its Muslim population since 1970, and now has over 1,000 mosques.

There is a pattern to Muslim immigration into western countries. First, we see a wholesale drain on social services. In some publicized cases we find Muslim men collecting over $15,000 monthly from state welfare systems, receiving per capita stipends for each of their many children and wives (yes, wives). The social welfare systems of most chic EU members are depleted as a result, adding to the already heavily strained budgets that must pay out large pensions and benefits to union members who retired at young ages.

Then, these “peaceful” Islamic adherents tend to become more demanding and violent as their percentage of population grows in these countries, and leaders and agitators begin to demand “religious rights” (extended privileges and Sharia Law) for Muslims, occupying the streets or rioting and burning in protest.

Are western alarmists the only ones who see an imminent takeover of the West?

“There are signs that Allah will grant victory to Islam in Europe without swords, without guns, without conquest. We don’t need terrorists, we don’t need homicide bombers. The fifty-plus million Muslims there will turn it into a Muslim continent within a few decades.” Muammar Gaddafi.

Perhaps Americans can afford complacency, many seem to believe. In fact, Canada, with its FR of 1.6, has had an increase in its population of over 2,000,000 in this past decade. How is that possible? Muslim immigration and FR.

What is America’s FR? It is down to a nearly unrecoverable 1.6. However, with the rapid Latino influx, our combined FR is 2.11—the bare minimum required to sustain a population, albeit a changing one. How about America’s Muslim population, you ask? In 1970 it was 100,000. Since then, it is difficult to tell, because the government doesn’t track them very closely (it’s not PC), but they tell us it is somewhere between a few million and 9,000,000.

Muslims are indeed beginning to become extremely vocal about demanding their “religious rights” in America. Demands for Sharia Law and examples of honor killings are springing up all around us. Liberal PC is enabling the behavior. We have witnessed that if Bill O’Reilly merely mentions on The View that it was Muslims who attacked Americans on 9/11 there is an orchestrated and exaggerated protest exodus of the hosts to enforce their PC speech limits—thus ensuring that no practical discussion occurs about safety or self-preservation.

With the rise of militant Islam in the West, it is time for a serious discussion on the direction we want our nations to take. If we do not make some tough, non-PC decisions soon, our granddaughters will be wearing burkas and will be stoned to death in the streets for whispering the name of Jesus. The current talk of gay marriage will be reduced to public beheadings for homosexuality. This is not speculation, but a mathematical certainty. If we continue at the current rate, Muslims will become the majority populations in all Western countries, and guess how they’ll vote. Violence that invariably attends Islam will be widespread, filling our streets, just as it does every day in countries with majority Muslim populations.

Of course, the liberal sophist will scoff publically at such an assertion; but one day in the streets of a majority Muslim population is all the proof needed to support it.

To those truly peace loving practitioners of Islam who live among us, and who refuse to follow their Eastern leaders into paths of Jihad, Dar-es-Salaam, Sharia, and cleansing violence, we encircle you in arms of brotherhood and welcome you as fellow-citizens. But we are at the point where we need to receive extremely clear declarations of peace and non-violence from any Muslim that seeks a place among us. To blindly pretend that a rogue elephant is not standing in the middle of the room is a foolish and dangerous path.