Notice: Function add_theme_support( 'html5' ) was called incorrectly. You need to pass an array of types. Please see Debugging in WordPress for more information. (This message was added in version 3.6.1.) in /home/kj8d9sfz7jzn/public_html/federalistpress.com/wp-includes/functions.php on line 5831
 Trial Begins for Dem Officials in Obama-Clinton Ballot Petition Fraud 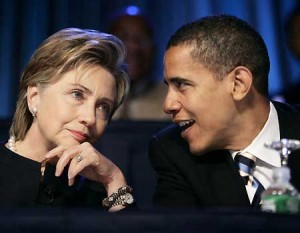 The trial is underway for a former Democratic official and a Board of Elections worker who are accused of being part of a plot that has raised questions over whether President Obama’s campaign — when he was a candidate in 2008 — submitted enough legitimate signatures to have legally qualified for the presidential primary ballot.

The two face charges of orchestrating an illegal scheme to fake the petitions that enabled then-candidates Obama, and Hillary Clinton, to qualify for the race in Indiana.

Morgan is accused of being the mastermind behind the plot, by allegedly ordering Democratic officials and workers to fake the names and signatures that Obama and Clinton needed to qualify for the presidential race. Blythe, then a Board of Elections employee and Democratic Party volunteer, has been accused of carrying out those orders by forging signatures on Obama’s petitions.

Two former Board of Elections officials have already pleaded guilty to charges related to the scheme and could testify against Morgan and Blythe.

Former board worker Beverly Shelton, who allegedly was assigned the task of forging the petitions for Hillary Clinton, pleaded guilty in March to charges of forgery and falsely making a petition. The board’s former Democratic head of voter registration, Pam Brunette, pleaded guilty in April to felony forgery, official misconduct, and falsifying a petition.

The alleged scheme was hatched in January of 2008, according to affidavits from investigators who cite former Board of Registration worker Lucas Burkett, who told them he was in on the plan at first, but then became uneasy and quit. He waited three years before telling authorities about it, but if revelations about any forgeries were raised during the election, the petitions could have been challenged during the contest. Any candidate who did not qualify with enough legitimate signatures at the time could have been bounced from the ballot.

The Indiana trial has raised questions about whether in 2008, candidate Obama actually submitted enough legitimate signatures to have legally qualified.

Under state law, presidential candidates need to qualify for the primary ballots with 500 signatures from each of the state’s nine congressional districts. Indiana election officials say that in St. Joseph County, which is the 2nd Congressional District, the Obama campaign qualified with 534 signatures; Clinton’s camp had 704.

Prosecutors say that in Obama’s case, nine of the petition pages were apparently forged. Each petition contains up to 10 names, making a possible total of 90 names, which, if faked, could have brought the Obama total below the legal limit required to qualify. Prosecutors say 13 Clinton petitions were apparently forged, meaning up to 130 possibly fake signatures. Even if 130 signatures had been challenged, it would have still left Clinton with enough signatures to meet the 500-person threshold.

An Indiana State Police investigator said in court papers that the agency examined the suspect Obama petitions and “selected names at random from each of the petition pages and contacted those people directly. We found at least one person (and often multiple people) from each page who confirmed that they had not signed” petitions “or given consent for their name and/or signature to appear.”  The case was charged citing 20 forgeries — not the total number of possible fake entries — because that was considered a sufficient amount to prosecute.

“That’s not my signature,” Charity Rorie, a mother of four, told Fox News when showed the Obama petition with her name and signature. She said it “absolutely” was a fake.

Charity told Fox News that her husband’s entry was also a forgery, and that they have not been contacted by investigators or any authorities looking into the scandal.

“It’s scary, it’s shocking. It definitely is illegal. A lot of people have already lost faith in politics and the whole realm of politics, so that just solidifies our worries and concerns.”

Robert Hunter, Jr. said his name was faked, too.

“I did not sign for Barack Obama,” he told us. As he examined the Obama petition in his hands, Hunter pointed out that “I always put ‘Junior’ after my name, every time … there’s no ‘Junior’ there.”

Even a former Democratic Governor of Indiana, Joe Kernan, told Fox News that his name was forged.

The allegations were first uncovered by Indiana native and Yale University senior Ryan Nees, who wrote about the revelations for the political newsletter, Howey Politics Indiana.

“What’s worrisome about this scheme is that it wasn’t a single bad actor going rogue. Rather, four people were charged as co-conspirators, and two of the four have already pleaded guilty,” Nees told Fox News.

Nees believes that had the petitions been challenged during the presidential election, “it’s unlikely either candidate would have qualified for the ballot.”

He said the fraud was clearly evident, “because page after page of signatures are all in the same handwriting.” He noted that no one raised any red flags “because election workers in charge of verifying their validity were the same people faking the signatures.”

Both Morgan and Blythe have pleaded not guilty, and when approached by Fox News in 2011, Blythe refused to talk about the case.

Morgan’s attorney declined our request for an interview, and Blythe’s attorney has not responded to our efforts for comment.

The petition process is vital to candidates’ campaigns.

In the 2012 presidential race, Republican candidate Newt Gingrich was tripped up by that process in Virginia. He failed to qualify for the GOP primary ballot in that state, because authorities said hundreds of signatures on his campaign’s petitions were faked. A Gingrich campaign worker has pleaded guilty, and another still faces charges.

Petition fraud also cost Michigan Republican Rep. Thaddeus McCotter his public office. McCotter, who also ran for the GOP presidential nomination in 2012, has accused former campaign workers of intentionally faking his congressional primary race petition signatures. The result was that McCotter did not submit the legal number of signatures needed to qualify for the ballot, and that failure forced him to resign his congressional seat last July. While McCotter was not implicated in any wrongdoing, two former campaign aides pleaded no contest to criminal charges, and one pleaded guilty.