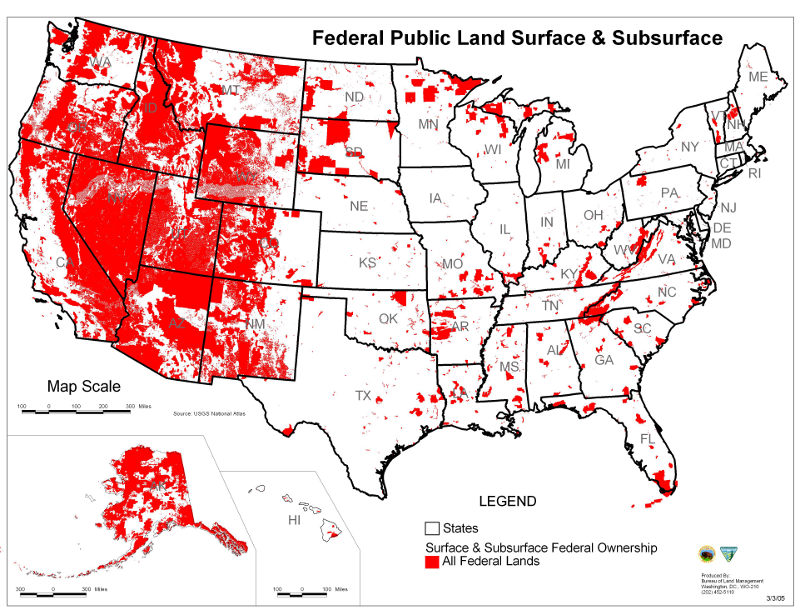 It is shameful that the Federal government has failed to follow through on its obligations under the Constitution to restore the state lands temporarily ceded to it during the statehood process of the Western States. A quick glance at the map above demonstrates just how much land is yet to be returned to the Western States.

As thoroughly explained in the recent article of November 21, 2016, Becky Lockhart: Western Lands Must Be Returned to States, at the time the states (territories) temporarily ceded their land to the federal government to clear the title, the Congress had an obligation to return those lands to the states upon their entry into the United States. And indeed, as all of the Eastern States went through the process, the Congress fulfilled its obligation of restoring the lands to the states. Although the same laws and responsibilities were in force when the Western States were admitted, Congress has thus far failed to follow through on its same obligations.

Have the Western States attempted to force Congress to perform its Constitutional duty to return the lands? Yes. The Courts have ruled that Congress does indeed have the obligation to return the lands to the Western States, that all states must be admitted on “Equal Footing” as demanded by the Constitution and Land Compacts–the caveat, however, is that there is no time specified in the laws WHEN Congress must restore the lands. Liberals in Congress have used this loophole to indefinitely delay the restoration of the lands, while liberal presidents have abused their authority to designate antiquities and monuments, snatching up many millions of acres of western lands at a time.

Now that the GOP is in power, NOW is the time to restore the western lands to the Western States. We call upon President Trump and the GOP controlled Congress to do so–immediately.

James Thompson is an author, who also ghostwrites books for prominent business and political leaders. He was completing the book of Utah’s Speaker of the House, Becky Lockhart, State of Balance, covering these very issues, when Speaker Lockhart died suddenly and unexpectedly.