The New York Times appeared to reinforce a claim President Trump recently made about ObamaCare being on the brink of collapse.

In a tweet last week, the president said the Affordable Care Act will “explode” and cause all sides to “get together and piece together a great healthcare plan for the people.”

The Times reported that if the health insurer Anthem leaves the ObamaCare marketplace, it would leave a large swath of Appalachia and parts of the western states without a single ACA insurance option.

A map on the Times’ website shows potential “coverage gaps” in parts of Ohio, Kentucky, Virginia and Georgia, as well as pieces of Missouri and Colorado.

According to the same map, a majority of the counties from Memphis to Savannah are only covered by one marketplace insurer.

Trump nodded to the paper’s findings on Saturday, tweeting that “The failing @nytimes finally gets it – “In places where no insurance company offers plans, there will be no way for ObamaCare customers to use subsidies to buy health plans.” In other words, Ocare is dead. Good things will happen, however, either with Republicans or Dems.” 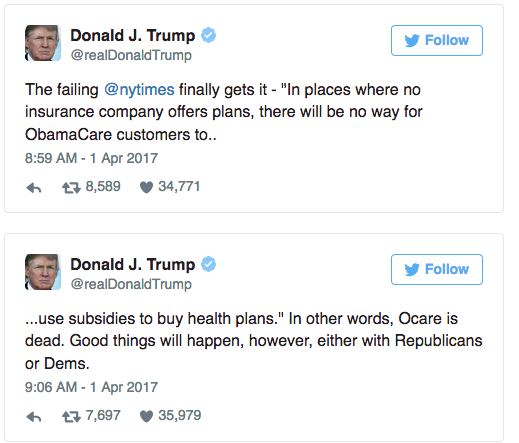 If Anthem or another insurance company that is the only option in certain areas leaves those counties or states without an ObamaCare marketplace option, it would also mean those residents would not be eligible for federal subsidies to lower their costs.

Parts of Tennessee are already potentially without an insurer next year, the Times points out, because Humana is planning on leaving the marketplace.