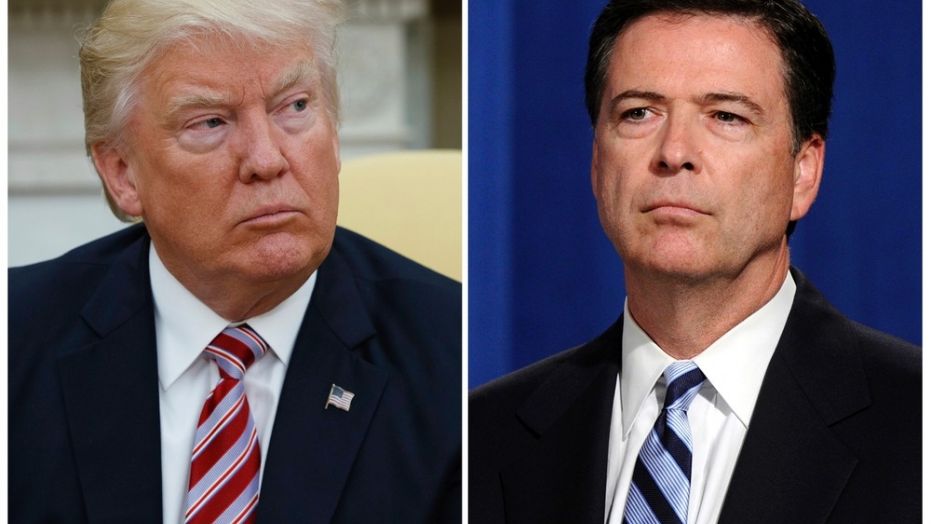 President Trump declared on Twitter Wednesday that James Comey “totally protected Hillary Clinton,” after the FBI confirmed the former bureau boss drafted a statement on the private email case two months before it was over.

In a series of tweets, Trump also swiped at the Justice Department, seeming to suggest they review what he called an apparent “fix.”

“Wow, FBI confirms report that James Comey drafted letter exonerating Crooked Hillary Clinton long before investigation was complete,” Trump tweeted. “Many people not interviewed, including Hillary Clinton herself. Comey stated under oath that he didn’t do this –obviously a fix? Where is Justice Dept?” 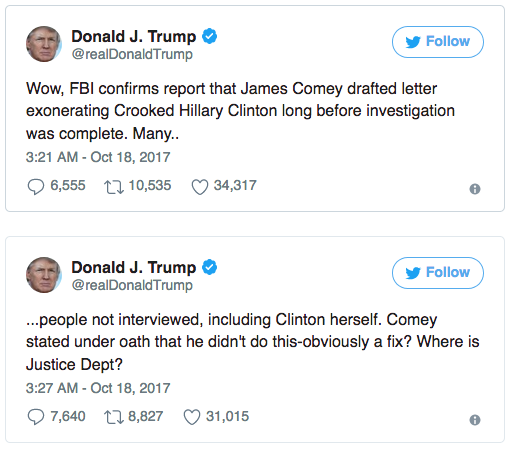 He followed up: “As it has turned out, James Comey lied and leaked and totally protected Hillary Clinton. He was the best thing that ever happened to her!”

The flurry of tweets was in reference to the FBI releasing documents this week that prove Comey began drafting a statement regarding the Clinton email investigation months before he interviewed her and other key witnesses. The document release was titled “Drafts of Director Comeys July 5, 2016 Statement Regarding Email Server Investigation Part 01 of 01.”

The release bolstered critics’ claims that Comey was drafting an “exoneration statement” well before ending the case and recommending against criminal charges.

The contents of the newly released emails, however, were largely unclear as the majority of the document was redacted. The records, that are now public, show the email titled “Midyear Exam—UNCLASSIFIED” was sent by Comey on May 2, 2016 to FBI Deputy Director Andrew McCabe, General Counsel James Baker and James Rybicki, chief of staff and senior counselor.

Trump’s Wednesday challenge to the Justice Department regarding the matter was a throwback to his summer criticism of the nation’s top law enforcement official, Attorney General Jeff Sessions. While Trump had been at odds with one of his earliest supporters over the decision to recuse in the Russia probe, Trump in recent weeks has dialed down that criticism.

The existence of the Comey documents was first brought to light by Sen. Chuck Grassley, R-Iowa, chairman of the Senate Judiciary Committee, and Sen. Lindsey Graham, R-S.C., after they reviewed transcripts with top Comey aides who alluded to the email’s existence.

The Judiciary Committee penned a letter on Aug. 30 to newly appointed FBI Director Christopher Wray noting their findings, saying that “it appears that in April or early May of 2016, Mr. Comey had already decided he would issue a statement exonerating Secretary Clinton. That was long before FBI agents finished their work.”

“The outcome of an investigation should not be prejudged while FBI agents are still hard at work trying to gather the facts,” the letter stated.

The existence of these documents raised questions over Comey’s June 2017 Senate testimony regarding his decision to go public with findings in the Clinton email investigation. Comey noted former Attorney General Loretta Lynch’s involvement in the probe, including her controversial meeting with former President Bill Clinton days before his wife was interviewed.

Last week, the FBI said it uncovered 30 pages of documents related to that controversial 2016 tarmac meeting.