“The last thing we need in Alabama and the U.S. Senate is a Schumer/Pelosi puppet who is WEAK on Crime, WEAK on the Border, Bad for our Military and our great Vets, Bad for our 2nd Amendment, AND WANTS TO RAISES [sic] TAXES TO THE SKY,” Trump tweeted. “Jones would be a disaster!” 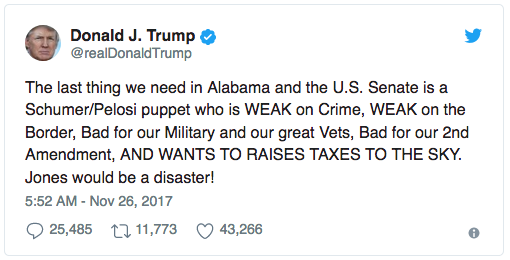 Trump is in a tough political position. He and fellow Republicans desperately need to keep the Alabama Senate seat left open after GOP Sen. Jeff Session became U.S. attorney general, considering they now have just a narrow 52-46 member majority in the chamber.

Moore, a Christian conservative, has been accused in recent weeks of sexual misconduct with teenage women roughly four decades ago. He has denied the allegations and refused to quit the race, with Election Day on December 12.

Trump has said Moore should step aside if the allegations are true. However, the president, before leaving on Thanksgiving break, appeared to soften his position, telling reporters, “I can tell you one thing for sure: We don’t need a liberal person in there, a Democrat Jones.”