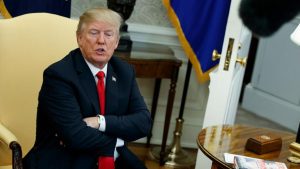 Among his first statements following Friday’s release of the now-declassified memo by Republicans in control of the House Intelligence Committee, Trump suggested Saturday the revelations in the document prove the ongoing probe is a “witch hunt.”

“This memo totally vindicates ‘Trump’ in probe,” Trump tweeted Saturday. “But the Russian Witch Hunt goes on and on. Their [sic] was no Collusion and there was no Obstruction (the word now used because, after one year of looking endlessly and finding NOTHING, collusion is dead). This is an American disgrace!” 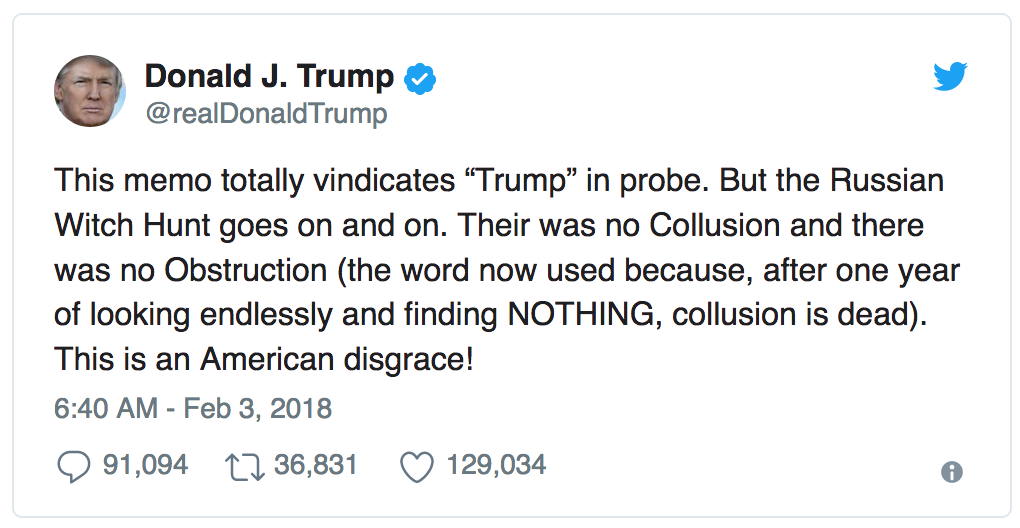 The four-page memo, written by House Intelligence Committee Chairman Devin Nunes, R-Calif., alleges intelligence abuse by the Department of Justice and the FBI during the 2016 presidential campaign. Particularly, it alleges that the two agencies requested a surveillance warrant using a disputed anti-Trump dossier funded by Democrats.

The memo said former FBI Deputy Director Andrew McCabe testified to the committee that “no surveillance warrant would have been sought” from the FISA court “without the Steele dossier information.”

The memo said it was not disclosed that the dossier was authored by an outspoken Trump critic and former British spy, Christopher Steele.

“What’s going on in this country, I think it is a disgrace,” the president said at the White House after the memo was released. “When you look at that, and you see that, and so many other things what’s going on, a lot of people should be ashamed of themselves, and much worse than that.”

Nunes told Fox News’ Bret Baier on Friday that the release of the memo was out of “an obligation to the American people.”

“I have an obligation to the American people when we see FISA abuse,” Nunes said on “Special Report.” “These are secret courts that exist to target for foreigners, for catching terrorists, for catching people who might be bad actors and the American citizens that are represented before this court have to be protected, and the only place that can protect them is the U.S. Congress when abuses do occur.”

Trump has repeatedly argued that the investigation – which was taken by special counsel Robert Mueller in May – that the probe has found no collusion from his campaign and should be concluded.

Prior to the release of the memo Friday, Trump tweeted: “The top Leadership and Investigators of the FBI and the Justice Department have politicized the sacred investigative process in favor of Democrats and against Republicans – something which would have been unthinkable just a short time ago. Rank & File are great people!”