Notice: Function add_theme_support( 'html5' ) was called incorrectly. You need to pass an array of types. Please see Debugging in WordPress for more information. (This message was added in version 3.6.1.) in /home/kj8d9sfz7jzn/public_html/federalistpress.com/wp-includes/functions.php on line 5831
 Trump Issues Travel Restrictions on 8 Countries, Adding North Korea and Venezuela 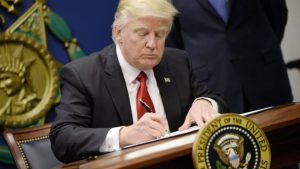 President Trump on Sunday signed off on updated travel restrictions that would limit entry for people coming to the U.S. from eight countries, as the existing travel ban is set to expire.

The new travel restrictions, set to take effect Oct. 18, would slow or limit entry from citizens of North Korea, Chad, Iran, Libya, Somalia, Syria, Venezuela and Yemen. North Korea and Venezuela were not listed in the earlier ban.

Iraqi citizens do not face the same travel restrictions, but will “be subject to additional scrutiny to determine if they pose risks” to U.S. security, the White House said.

The new policy could complicate the Supreme Court’s review of the order. The high court is scheduled to hear arguments over its legality on October 10.

Officials stressed that valid visas would not be revoked as a result of the proclamation. The order also permits, but doesn’t guarantee, case-by-case waivers. 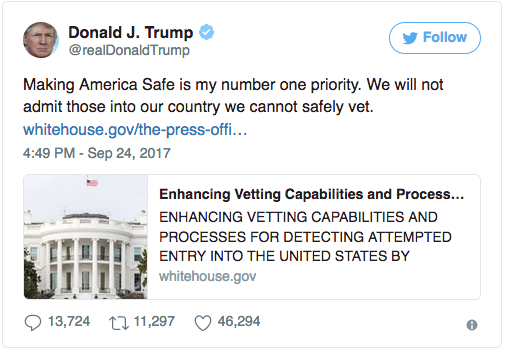 “As President, I must act to protect the security and interested of the United States and its people,” the proclamation states. He later tweeted, “Making America Safe is my number one priority. We will not admit those into our country we cannot safely vet.”

The announcement comes the same day Trump’s temporary ban on visitors from six Muslim-majority countries is set to expire, 90 days after it went into effect.

The targeted countries are those that the Department of Homeland Security officials have said refuse to share information with the U.S., or haven’t taken necessary security precautions.

Acting Homeland Security Secretary Elaine Duke, in a statement released Sunday, said the new travel restrictions “will protect Americans and allow DHS to better keep terrorists and criminals from entering our country. The restrictions announced are tough and tailored, and they sent a message to foreign governments that they must work with us to enhance security.”

Secretary of State Rex Tillerson said in a statement that Trump’s proclamation is the president “carrying out his duty to protect the Ameican people.”

Tillerson added: “The State Department will coordinate with other federal agencies to implement these measures in an orderly manner. We will continue to work closely with our allies and partners who share our commitment to national and global security.”

The travel restrictions are based on a new baseline developed by DHS that includes factors such as whether countries issue electronic passports with biometric information and share information about travelers’ terror-related and criminal histories. The U.S. then shared those benchmarks with every country in the world and gave them 50 days to comply.

The eight countries the restrictions target are those that refused or were unable to comply.

Following the terrorist attack in London last week, Trump tweeted: “The travel ban into the United States should be far larger, tougher and more specific-but stupidly, that would not be politically correct!”

Critics have accused Trump of overstepping his presidential authority and violating the Constitution’s protections against religious bias. During his campaign, Trump called for a “total and complete shutdown of Muslims entering the United States.”