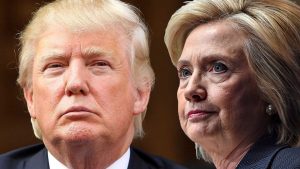 Donald Trump has opened up a 7-point lead over Hillary Clinton nationally, according to a Rasmussen Reports poll released Thursday.

Trump has 44 percent support to Clinton’s 37 percent among likely voters polled by the conservative-leaning Rasmussen. Another 13 percent favor another candidate, and 6 percent are undecided.

Thursday’s survey marks the third week in a row that the presumptive Republican nominee has led Rasmussen’s poll. It shows Trump at his highest level of support in a Rasmussen poll since October.

According to a RealClearPolitics average of polls, Clinton holds a 3.1-point lead over Trump, 44 percent to 40.9 percent. Most recent polls show Clinton ahead by a small margin, but a CBS News/New York Times poll also released Thursday showed Clinton and Trump tied.

The poll found that voters view Trump and Clinton equally regarding their preparedness for the White House.

Trump also leads among voters not affiliated with either major party. Among those voters, though, 27 percent prefer another candidate or are undecided.

Trump also leads Clinton by 17 points among white voters and 21 points among men. He also has an advantage over Clinton among voters age 40 and over. Clinton leads by 8 points among women.

The candidates are tied among younger voters.