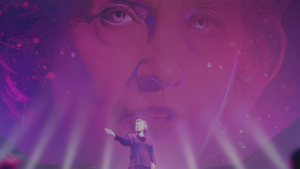 Moviegoers have attended American theaters over the past five years and watched three movies produced by conservative writer and producer, Dinesh D’Souza: 2016: Obama’s America (2012); America: Imagine The World Without Her (2014); and now, Hillary’s America: The Secret History Of The Democratic Party (2016).

These movies provide the viewer with historical context for modern politics, and meticulously document and chronicle how the American Left has systematically undermined personal liberties preserved in the original Constitution, exploiting Blacks and other minorities to wrest political power and wealth from The People.

Unfortunately, most Blacks and minorities have never seen these movies. Indeed, they would be shocked to see the truth of American history unfold before them on the big screen.

D’Souza’s latest installment, “Hillary’s America: The Secret History Of The Democratic Party,” exposes how the Democratic Party was the party of slavery, and those who wore the masks of the KKK; and when they lost the Civil War, they continued to discriminate against Blacks and minorities through fighting the 13th, 14th and 15th Amendments to the Constitution, which granted Blacks rights as citizens, and to vote, etc., It also documents subsequent Republican efforts to overrule Democrat laws and doctrines, like the Jim Crow laws.

The modern media has turned history on its ear, rewriting the truth about Republicans being the Party of equality and civil rights, and Democrats fighting them at every turn.

When the Left lost its fight against equality and civil rights, they decided to exploit Blacks and other minorities to undermine the American economy and accumulate political power, with Great Society and similar legislation–greatly expanding governmental powers while ensnaring American Blacks in ghetto life as a permanent underclass. Today, Blacks and minorities are born into fatherless families, and lose around 3,500 babies daily to abortion clinics. They live in poverty, in violent neighborhoods, trapped in drug use and lives of crime, and are given no choice of which schools they can attend–all thanks to the impoverishment policies of the Democratic Party.

Why do American Blacks and other minorities continue to believe the lie about Republicans and Democrats, and their role in enslavement and liberation? Because the media and educational institutions purposefully protract the lie. See articles herein, i.e.: Dems Entrenched in Power Institutionally – We Must Eliminate Institutional Power July 28, 2016; Independence Day 2016: Revolution July 3, 2016; Democrats Destroying Minorities July 13, 2012. 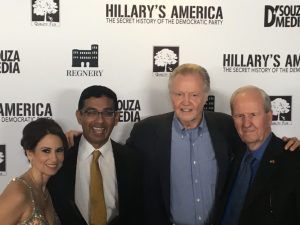 Because Presidential hopeful Donald Trump is seeking to educate Blacks and minorities about Democrat party exploitation, and has begun spreading his message that their policies have been destructive to Blacks and other minorities, it occurs to me that broadcasting D’Souza’s latest cinematic work might have immediate and far reaching benefits in spreading that message.

Indeed, the Trump campaign might be well served by making “Hillary’s America: The Secret History Of The Democratic Party” available for free viewing to as many American Blacks as possible. How? By buying out showings in theaters located in predominantly black neighborhoods, and advertising on black radio stations that the movie is free, along with free drinks and popcorn.

Similarly, Trump could purchase broadcast programming on cable television networks that cater predominantly to American Blacks and other minorities and run “Hillary’s America: The Secret History Of The Democratic Party.”

There are many Blacks and minorities who are beginning to question the validity of the false message the media and others have been broadcasting. D’Souza’s movies, produced by Spielberg veteran Gerald R. Molen, would provide much needed ammunition for traditionalists in the Black community, who would like the opportunity to explain to the rest of the community why Martin Luther King, Jr. was a Republican.