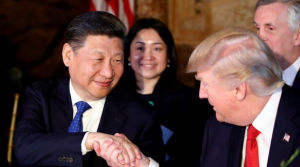 President Trump at the start of his meeting Saturday in Germany with Chinese President Xi Jinping called China a “great trading partner” and said the increasing North Korea nuclear threat will eventually be resolved “one way or the other.”

The much-anticipated meeting is one of several Trump and top administration officials are having Saturday with world leaders at the G20 summit in Hamburg, Germany. But it is consider perhaps the most critical.

China is North Korea’s biggest trading partner, which gives the country considerable influence over Pyongyang and its growing threat, which includes developing a nuclear warhead and launching long-range missiles to transport them.

“Something has to be done,” the president also said.

Xi also spoke briefly, but his comments in Chinese were not immediately translated and available.

Trump said “many things have happened” that have created trade imbalances between the United States and China but “we’re going to turn that around.”

The president was flanked in the meeting room by about a dozen top administration officials including Secretary of State Rex Tillerson and adviser Jared Kushner.

A Pentagon spokesman says the long-range missile that North Korea test-launched Tuesday was a type not previously seen by U.S. analysts.

Following North Korea’s missile launch, Trump expressed frustration with China over its expanding trade with North Korea. Trump had expressed optimism after his first meeting with China’s president that the two would work together to curb North Korea’s nuclear pursuits.

The president tweeted Wednesday, “Trade between China and North Korea grew almost 40% in the first quarter. So much for China working with us – but we had to give it a try!”

China has long resisted intensifying economic pressure on neighboring North Korea, in part out of fear of the instability that could mount on its doorstep, including the possibility of millions of North Koreans fleeing into China. China has also been concerned that a reunited, democratic Korea — dominated by South Korea — would put a U.S. ally, and possibly U.S. forces, on its border.

“Global action is required to stop a global threat,” he said.

Tillerson also said any country helping North Korea militarily or economically, taking in its guest workers or falling short on Security Council resolutions “is aiding and abetting a dangerous regime.”

However, his statement did not specifically mention China.

John Roberts and The Associated Press contributed to this report.