Notice: Function add_theme_support( 'html5' ) was called incorrectly. You need to pass an array of types. Please see Debugging in WordPress for more information. (This message was added in version 3.6.1.) in /home/kj8d9sfz7jzn/public_html/federalistpress.com/wp-includes/functions.php on line 5831
 Trump to Leakers: You ‘will be caught’ 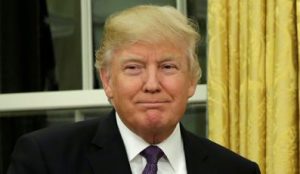 President Trump vowed Thursday to root out those responsible for leaking the “illegal classified” information that has fueled a string of damaging news reports on his administration, warning the leakers they “will be caught!”

“Leaking, and even illegal classified leaking, has been a big problem in Washington for years. Failing @nytimes (and others) must apologize!” Trump tweeted.

He added: “The spotlight has finally been put on the low-life leakers! They will be caught!”

The renewed focus on tracking down the sources causing political migraines for his core team follows National Security Adviser Michael Flynn’s resignation amid reports he misled Vice President Pence about a phone call with a Russian diplomat. Flynn’s alleged deception was revealed by leaks.

Trump’s tweets Thursday echoed his comments a day earlier during his joint press conference with Israeli Prime Minister Benjamin Netanyahu. When asked about Flynn’s resignation, Trump said the situation was “unfair” and emphasized that “documents and papers” were “illegally – I stress that –illegally leaked.”

The flood of anonymous sources bolstering a wide array of news accounts has given rise to rumors of a so-called “deep state coup,” in which members of the intelligence community are potentially working to undermine the new president and his advisers.

“It certainly seems like it, and remember the intelligence community has a long history of doing this,” Fox News contributor Erick Erickson said on “Fox & Friends” on Thursday, linking the suspected sabotage to Trump’s desire to roll back the Iran nuclear deal.

“They leaked information damaging to [former presidents] Bill Clinton, George [W.] Bush and Barack Obama when it served their interest, so Donald Trump is no different.”

Trump is not the only Republican leader seeking answers on the leak issue.

“No matter where you are on the political spectrum, you cannot have classified information migrating out into a non-classified setting,” Chaffetz said.