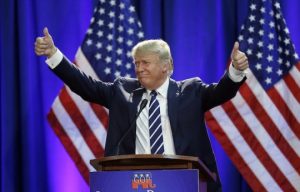 In a sweeping victory that has stunned the pundits, New York construction billionaire Donald Trump has won the presidency of the United States of America.

Following an 18 month campaign, and an uphill climb against the rushing current of a hostile press, Trump has proved his detractors wrong–again.

For the first time since 1928 the Republican party will take the reigns of the US government, controlling the Congress and the White House, giving the GOP the opportunity to appoint conservative jurists to the US Supreme Court that will influence the course of the nation’s politics for decades to come.

This election is seen as a stinging rebuke against the failed policies of the left and political elitists. It is an act of revolt against government overreach and unresponsive representation.

Mr. Trump will deliver his victory speech from the Hilton in Midtown, Manhattan. Mrs. Clinton failed to attend her headquarters to concede the election, but instead sent John Podesta to send the awaiting crowd home empty handed.