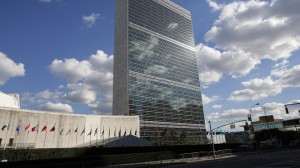 The resolution adopting the landmark treaty was approved by a vote of 154 to 3 with 23 abstentions.

The 193-member world body voted after Iran, North Korea and Syria blocked its adoption by consensus at a negotiating conference last Thursday. The three countries voted “no” on the resolution.

The vote capped a more than decade-long campaign by activists and some governments to regulate the $60 billion global arms trade and try to keep illicit weapons out of the hands of terrorists, insurgent fighters and organized crime.

It will not control the domestic use of weapons in any country, but it will require countries to establish national regulations to control arms transfers.