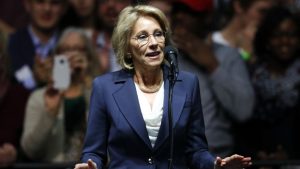 Three of the groups challenging the reform agenda of President-elect Donald Trump and his education secretary nominee Betsy DeVos received more than $2.6 million from teachers unions and their allies, according to federal labor filings.

DeVos, a pioneer in the school choice and charter school movements over the last two decades, has received vocal opposition from Democrats and some of the country’s most powerful unions. The National Education Association, American Federation of Teachers, and AFL-CIO, which serves as an umbrella group for dozens of unions including the AFT, have all called on the Senate to reject the nomination.

They have also pumped millions of dollars into think tanks and activist groups that have supplied Democrats with intellectual ammunition to oppose her.

DeVos, the head of the American Federation for Children, has come under scrutiny from a number of liberal groups and media outlets, along with unions. The Economic Policy Institute (EPI) and Center for American Progress (CAP) have each released reports critical of charter schools since President-elect Donald Trump announced the nomination in November.

EPI released a study on Nov. 30 blaming the rise of charter schools for creating “inefficiencies and redundancies within district boundaries, from the organization and delivery of educational programs to student transportation, increasing the likelihood of budgetary stress on the system as a whole, and the host government in particular.”

The report, written by Rutgers University Prof. Bruce Baker, argued that giving students the ability to enroll in schools outside of their low-performing district school raised transportation costs, increased congestion, and diverted money away from “unified education systems.” The report has also been used to criticize DeVos‘ approach to education.

EPI has received nearly $1.7 million from the NEA, AFT, and AFL-CIO since 2014, according to federal labor filings. The think tank, which describes itself as non-partisan, received more than $680,000 in 2015 alone from the three unions, and AFL-CIO footed the bill for catering costs at a January reception for the group that year. Those expenses were classified as “membership dues” and “support for economic policy research” on the Labor Department forms.

EPI did not include a disclosure in the report or its press release, though it does provide a list of donors on its website. Unions made 27 percent of all contributions between 2010 and 2014.

The Center for American Progress, the liberal think tank founded by former Hillary Clinton campaign manager John Podesta, has also been at the forefront over DeVos’ confirmation battle. Its lobbyists and officials have been quoted in numerous media outlets criticizing Trump’s decision as a “pay-to-play nomination.” It released an analysis on Thursday of her family’s political donations to Republican lawmakers on Thursday, saying that they constituted a “conflict of interest.”

The analysis did not disclose that CAP and its advocacy arm CAP Action Fund has received about $800,000 in contributions and grants from the NEA, AFT, and AFL-CIO since 2014. Labor unions have reported a range of purposes for the expenses to the group, including “member education costs,” contribution,” and “natl partnership grant.” CAP did not respond to request for comment about those donations. 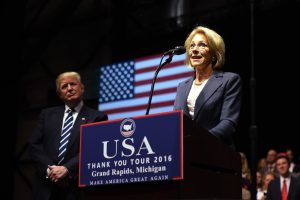 The Partnership for Working Families has also gotten involved in the fight against DeVos through its In the Public Interest project. The group has helped organize activists online to oppose her nomination, directing liberals to networking avenues to contact lawmakers and local media outlets.

“Betsy DeVos, Trump’s pick for Education Secretary, wants to steer public money to charter schools, online learning, and voucher programs. But those of us who believe all kids deserve a quality education are gearing up for a fight,” In the Public Interest said in an online fundraising appeal.

The Partnership for Working Families received more than $135,000 from AFL-CIO in 2015 and 2016, according to the union’s Labor Department filings. The payments were made to “support research/devlpmnt strategy on raising wages” and “support [the] Power for Working Families” campaign.” Neither the Partnership, nor In the Public Interest responded to request for comment.

Trump transition team expected to meet resistance to DeVos’ nomination. Phillip Stutts, who worked for the Department of Education under President George W. Bush before founding Go Big Media, has advised DeVos for the past two months. He had previously worked closely with DeVos to elect school choice supporters in Louisiana. DeVos’ efforts led to the rapid expansion of charter school in the wake of Hurricane Katrina. He said that the force of opposition reflects the impact that she has had in the school reform movement.

“Before Betsy DeVos, nobody challenged teachers unions. … The unions don’t have a monopoly on legislative or political power anymore. That’s her legacy,” he said.

Stutts added that lawmakers and the public would be able to see beyond the union caricature when she appears before the Senate Health, Education, Labor and Pensions Committee on Tuesday.

“She has always asked herself: ‘does this policy put kids first?’ This is somebody who demands results and wants to see more accountability,” he said. “The power of unions will continue to erode when all they care about is their own power, membership dues, and putting adults before children.”