Notice: Function add_theme_support( 'html5' ) was called incorrectly. You need to pass an array of types. Please see Debugging in WordPress for more information. (This message was added in version 3.6.1.) in /home/kj8d9sfz7jzn/public_html/federalistpress.com/wp-includes/functions.php on line 5831
 Unmasked: Obama’s Susan Rice Requested to Unmask Names of Trump Transition Officials 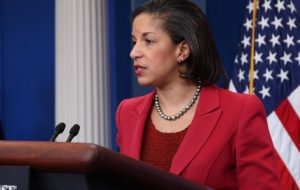 The unmasked names, of people associated with Donald Trump, were then sent to all those at the National Security Council, some at the Defense Department, then-Director of National Intelligence James Clapper and then-CIA Director John Brennan – essentially, the officials at the top, including former Rice deputy Ben Rhodes.

The names were part of incidental electronic surveillance of candidate and President-elect Trump and people close to him, including family members, for up to a year before he took office.

Rice was ambassador to the UN when she went on Sunday news shows to say the Benghazi attack was prompted by a video. (Fox News Photo)

White House Press Secretary Sean Spicer, asked about the revelations at Monday’s briefing, declined to comment specifically on what role Rice may have played or officials’ motives.

“I’m not going to comment on this any further until [congressional] committees have come to a conclusion,” he said, while contrasting the media’s alleged “lack” of interest in these revelations with the intense coverage of suspected Trump-Russia links.

When names of Americans are incidentally collected, they are supposed to be masked, meaning the name or names are redacted from reports – whether it is international or domestic collection, unless it is an issue of national security, crime or if their security is threatened in any way. There are loopholes and ways to unmask through backchannels, but Americans are supposed to be protected from incidental collection. Sources told Fox News that in this case, they were not.

This comes in the wake of Evelyn Farkas’ television interview last month in which the former Obama deputy secretary of defense said in part: “I was urging my former colleagues and, frankly speaking, the people on the Hill – it was more actually aimed at telling the Hill people, get as much information as you can, get as much intelligence as you can, before President Obama leaves the administration.”

Nunes has faced criticism from Democrats for viewing pertinent documents on White House grounds and announcing their contents to the press. But sources said “the intelligence agencies slow-rolled Nunes. He could have seen the logs at other places besides the White House SCIF [secure facility], but it had already been a few weeks. So he went to the White House because he could protect his sources and he could get to the logs.”

As the Obama administration left office, it also approved new rules that gave the NSA much broader powers by relaxing the rules about sharing intercepted personal communications and the ability to share those with 16 other intelligence agencies.

Rice is no stranger to controversy. As the U.S. Ambassador to the UN, she appeared on several Sunday news shows to defend the administration’s later debunked claim that the Sept. 11, 2012 attacks on a U.S. consulate in Libya was triggered by an Internet video.

Rice also told ABC News in 2014 that Army Sgt. Bowe Bergdahl “served the United States with honor and distinction” and that he “wasn’t simply a hostage; he was an American prisoner of war captured on the battlefield.”

Bergdahl is currently facing court-martial on charges of desertion and misbehavior before the enemy for allegedly walking off his post in Afghanistan.