Notice: Function add_theme_support( 'html5' ) was called incorrectly. You need to pass an array of types. Please see Debugging in WordPress for more information. (This message was added in version 3.6.1.) in /home/kj8d9sfz7jzn/public_html/federalistpress.com/wp-includes/functions.php on line 5831
 US Flies F-22 Jets Over South Korea 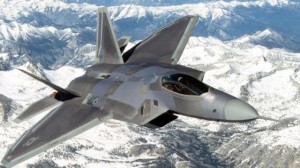 The United States has sent F-22 stealth fighter jets to South Korea to join Seoul forces in military drills after North Korea warned the Korean Peninsula has entered “a state of war.”

A senior U.S. official confirms to Fox News that the F-22 Raptors were deployed to Osan Air Base in South Korea from Japan on Sunday to support ongoing U.S.-South Korean military drills.

The meeting of the Supreme People’s Assembly follows near-daily threats from Pyongyang, including vows of nuclear strikes on South Korea and the U.S. In a statement released Sunday, U.S. military in South Korea urged North Korea to restrain itself.

“(North Korea) will achieve nothing by threats or provocations, which will only further isolate North Korea and undermine international efforts to ensure peace and stability in Northeast Asia,” the statement said.

Meanwhile, North Korea said Saturday its armed forces, “will blow up U.S. bases for aggression in its mainland and in the Pacific operational theaters including Hawaii and Guam.”

Kim also threatened to shut down a border factory complex that is the last major symbol of inter-Korean cooperation, according to the Associated Press.

The threats are seen as part of an effort to provoke the new government in Seoul to change its policies toward Pyongyang and to win diplomatic talks with Washington in order to gain more aid.

On Thursday, U.S. military officials revealed that two B-2 stealth bombers dropped dummy munitions on an uninhabited South Korean island as part of annual defense drills that Pyongyang sees as rehearsals for invasion. Hours later, Kim ordered his generals to put rockets on standby and threatened to strike American targets if provoked.

Military analysts have said a full-scale conflict between North and South Korea is extremely unlikely, noting that the Korean Peninsula has remained in a technical state of war for 60 years. But the North’s continued threats toward South Korea and the United States have raised worries that a misjudgment between the sides could lead to a clash.

In addition to the military exercise, the U.S. will fortify its defenses against a potential North Korean missile attack by adding more than a dozen missile interceptors to the 26 already in place at Fort Greely, Alaska, Defense Secretary Chuck Hagel has also announced.