Notice: Function add_theme_support( 'html5' ) was called incorrectly. You need to pass an array of types. Please see Debugging in WordPress for more information. (This message was added in version 3.6.1.) in /home/kj8d9sfz7jzn/public_html/federalistpress.com/wp-includes/functions.php on line 5831
 US Navy Ship Moves Off Korean Coast 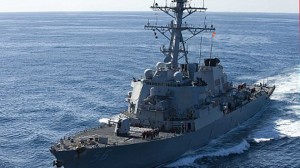 The U.S. military has moved a Navy ship capable of intercepting missiles to waters off the coast of the Korean Peninsula, as threats from North Korea’s Kim Jong Un escalate and the White House signals it wants to head off any potential conflict by flexing America’s military might.

A U.S. defense official confirmed to Fox News that the Navy had moved the U.S. destroyer to a location near South Korea. The ship, the USS McCain, is equipped with the Aegis defense system and is capable of shooting down missiles. Officials initially misidentified the ship but later clarified the USS McCain had been dispatched.

The defense official said the decision is not part of the ongoing joint military exercise with South Korea but part of the Navy’s general movements. The Navy had the same type of ship in this location as recently as December.

But, the positioning comes after the Pentagon dispatched two F-22 stealth fighter jets to South Korea to join Seoul forces in a training exercise, and after other demonstrations of U.S. capability last week.

White House Press Secretary Jay Carney said Monday that Kim Jong Un’s steadily escalating threats follow a “pattern,” but one that must be taken seriously. He said the U.S. is now taking “prudent” measures to “reassure our allies, demonstrate our resolve to the North and reduce pressure on Seoul to take unilateral action.”

This would include efforts to boost missile defense, last week’s rare flight of B-2 bombers to South Korea and likely the decision Sunday to deploy F-22 Raptors to Osan Air Base in South Korea.

With analysts warning that the biggest threat from North Korea is that it could start a war by going too far and provoking South Korea, Carney suggested the shows of strength are aimed at deterring the North from crossing that line.

“We believe this has reduced the chance of miscalculation and provocation,” Carney said of the B-2 flights and other actions.

Carney, though, said that despite the “harsh rhetoric” out of Pyongyang, the U.S. is not seeing changes to the country’s “military posture,” such as any “large-scale” mobilizations or positioning of forces.

“This pattern of bellicose rhetoric is not new, it is familiar,” Carney said. “We take it very seriously, we take prudent measures in response to it.”

The F-22 flight came after North Korea warned that the Korean Peninsula had entered “a state of war.”

A Pentagon spokesman confirmed to Fox News that the F-22 Raptors were deployed to Osan Air Base in South Korea from Japan on Sunday to support ongoing U.S.-South Korean military drills.

“This exercise has been planned for some time and is part of the air component of the Foal Eagle exercise,” spokesman George Little told reporters Monday.

Meanwhile, the North Korean leader gathered legislators Monday for an annual spring parliamentary session that followed a ruling party declaration that nuclear bomb building and a stronger economy were the nation’s top priorities.

The meeting of the Supreme People’s Assembly follows near-daily threats from Pyongyang, including vows of nuclear strikes on South Korea and the U.S.

North Korea said Saturday its armed forces, “will blow up U.S. bases for aggression in its mainland and in the Pacific operational theaters including Hawaii and Guam.”

Kim also threatened to shut down a border factory complex that is the last major symbol of inter-Korean cooperation.

The threats are seen as part of an effort to provoke the new government in Seoul to change its policies toward Pyongyang and to win diplomatic talks with Washington in order to gain more aid.