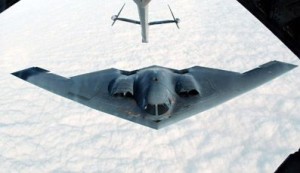 The U.S. military announced Thursday that two B-2 stealth bombers were sent to South Korea to participate in a training exercise, demonstrating the Pentagon’s commitment to defend its ally against threats from North Korea.

The two B-2 Spirit bombers flew more than 6,500 miles from Whiteman Air Force Base in Missouri to South Korea, dropping inert munitions before returning to the U.S., according to a statement released by U.S. Forces Korea.

“The United States is steadfast in its alliance commitment to the defense of the Republic of Korea, to deterring aggression, and to ensuring peace and stability in the region,” the statement said.

The B-2 Spirit is capable of delivering both conventional and nuclear weapons. The Pentagon said the mission was part of its ongoing Foal Eagle training exercise series, which began March 1 and ends April 30.

The exercise was announced a day after North Korea said it had shut down a key military hotline usually used to arrange passage for workers and goods through the Demilitarized Zone.

The hotline shutdown follows a torrent of bellicose rhetoric in recent weeks from North Korea, which is angry about annual South Korea-U.S. military drills and U.N. sanctions over its nuclear test last month. North Korea calls the drills rehearsal for an invasion; Seoul and Washington say the training is defensive in nature and that they have no intention of attacking.

North Korea’s threats and provocations are seen as efforts to provoke the new government in Seoul, led by President Park Geun-hye, to change its policies toward Pyongyang. North Korea’s moves at home to order troops into “combat readiness” are seen as ways to build domestic unity as young leader Kim Jong Un strengthens his military credentials.

North Korea previously cut Red Cross phone and fax hotlines with South Korea, and another communication channel with the U.S.-led U.N. command at the border between the Koreas. Three other telephone hotlines used only to exchange information about air traffic were still operating normally Thursday, according to South Korea’s Air Traffic Center.

North Korea said there was no need for communication between the countries in a situation “where a war may break out at any moment.”

In Washington, U.S. State Department spokesman Patrick Ventrell told reporters that North Korea’s “latest threat to cut off communication links coupled with its provocative rhetoric is not constructive to ensuring peace and stability on the peninsula.”

Although North Korea has vowed nuclear strikes on the U.S., analysts outside the country have seen no proof that North Korean scientists have yet mastered the technology needed to build a nuclear warhead small enough to mount on a missile.

Published March 28, 2013 / FoxNews.com / The Associated Press contributed to this report.