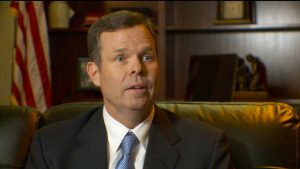 The witch hunt is over. Former Utah Attorney General, John Swallow is vindicated. His attorney, Scott Williams, was able to demonstrate to the jury of 5 men and 3 women that the only evidence against A.G. Swallow was fabricated by prosecutors.

For nearly a month now, the five man, three woman jury has been hearing from dozens of witnesses including lobbyists, lawyers, politicos and a man convicted of fraud.

The trial is the culmination of one of the biggest political scandals in state history, which resulted in the arrests of former Utah Attorney General Mark Shurtleff, Swallow and others. They were accused of a “pay to play” scheme involving people who had dealings with the AG’s office.

Prosecutors tried to portray a conspiracy between Shurtleff, his “enforcer,” Tim Lawson, and Swallow as a rising political star who was the “heir apparent.” Their case focused heavily on the testimony of Marc Jenson, who was facing a fraud case and said he paid for trips for the three to the lavish Pelican Hill resort in California in lieu of $4.1 million restitution.

Defense lawyers attacked Jenson’s credibility, branding him a “con man” who made up the accusations against them once he wound up in prison. They also criticized an FBI agent who disclosed to the jury why federal prosecutors weren’t pursuing charges.

Prosecutors’ case was not helped when one of their star witnesses, imprisoned St. George businessman Jeremy Johnson, refused to testify. After rejecting immunity deals, he was found in contempt and sentenced to 30 days in jail. Johnson was key to some of the counts against Swallow.

By the end of the trial, prosecutors dismissed four counts against Swallow.

I first met John Swallow in 1987, when we entered the first year of law school together at BYU’s J. Reuben Clark Law School. He was a talented young student, and a virtuous, religious man, and I watched him grow into an effective, principled attorney. I was saddened to see him dragged through this prosecutorial nightmare. Many are celebrating as this nightmare ends for a good man.

James Thompson is an author, who also ghostwrites books for prominent business and political leaders. He was completing the book of Utah’s Speaker of the House, Becky Lockhart, State of Balance, when Speaker Lockhart died suddenly and unexpectedly. Speaker Lockhart expressed her personal distress about the charges filed against A.G. Swallow just before her death. Mr. Thompson’s article of October 24, 2016, Mormons Determined to Give White House to Clinton, and Supreme Court to Left, was read by hundreds of thousands of LDS people before the election and is credited by some with swinging Mormon states in the election.