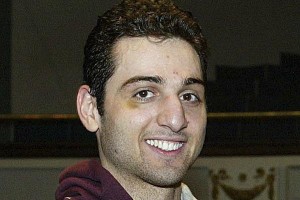 DEVELOPING: A man who was fatally shot by an FBI agent in Florida knew one of the suspects in the Boston Marathon bombings, a friend of the victim said Wednesday.

“The agent, along with other law enforcement personnel, were interviewing an individual in connection with the Boston Marathon bombing investigation when a violent confrontation was initiated by the subject,” the statement read. “During the confrontation, the individual was killed and the agent sustained non-life threatening injuries. As this incident is under review, we have no further details at this time.”

Khusen Taramov, who was at the scene and identified himself as the victim’s friend, said Todashev, 27, knew Tamerlan Tsarnaev, the 26-year-old former amateur boxer suspected in the April 15 bombings that killed three and injured more than 260, MyFoxOrlando.com reports.

The early Wednesday shooting occurred at an apartment complex near Universal Studios in Orlando, the Associated Press reports.

Taramov said he and Todashev had no connection with the Boston Marathon bombings, but the FBI had been questioning them since the attacks.

“He used to talk on the phone with him [Tsarnaev],” Taramov said of his friend. “They talked last time a month ago. After the bombing, I couldn’t believe it. The FBI kept asking, ‘What’s the connection?’ But there is no connection … no connection.”

An FBI agent was interviewing Todashev regarding his connections to Tsarnaev and other extremists. He was originally cooperative, but was shot after attacking the agent, NBC News reports.

Taramov said Todashev had planned to soon return to Chechnya, but recently canceled his plane tickets instead.

“Me and him and my friends, we knew this was going to happen. That’s why he wanted to leave the country,” Taramov said. “But he canceled the tickets. The FBI’s been pushing him, ‘Don’t leave, don’t leave.’ So he decided to stay.”

Taramov said he was questioned by the FBI earlier Tuesday but was allowed to leave, MyFoxOrlando.com reports. When he came back, he found out that Todashev had been shot dead, he said.

Messages seeking additional comment from FBI officials were not returned. Police officials in Boston told FoxNews.com they had no information regarding the shooting.

An FBI post-shooting review team has been dispatched from Washington, D.C., and expected to arrive in Orlando within 24 hours, Couvertier said in a statement.

Todashev was arrested on May 4 by the Orange County Sheriff’s Office, according to court records. He was charged with aggravated battery causing great bodily harm. Additional details were not immediately available.