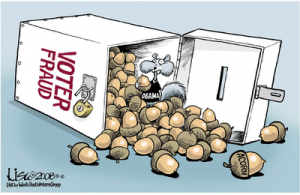 In the eight months since Human Events and The Columbus Dispatch reported that several counties in the major Swing State have voter rolls that boast literally 110 percent voter registration, the Obama-Holder Justice Department has yet to investigate the widespread voter fraud that is occurring in particularly Left-leaning districts.

Human Events also said that, an additional “31 more counties report over 90 percent voter registration, which is a good 20 percent higher than the national average.”

Furthermore, the Ohio Secretary of State, Jon Husted, said that he sent Attorney General Holder a letter in February of 2012, which warned him that “Common sense says that the odds of voter fraud increase the longer these ineligible voters are allowed to populate our rolls… I simply cannot accept that.”

Holder, nor anyone under his command, got back to the Secretary of State before the state turned Obama-Blue in November of 2012.  The Justice Department still has yet to respond.

Meanwhile, voter fraud continues to be a major issue in Ohio and around the country as a whole.

Human Events said that nationally, “The Pew Center for the States estimates about 24 million ineligible voter registrations, including more than 1.8 million dead people listed as voters; about 2.75 million with voter registrations in more than one state; and about 12 million voter records with incorrect addresses.”

While these numbers are staggering, what is even more shocking is that despite the Justice Department being made aware of these facts, Eric Holder still opposes a national requirement for voters to show ID in order to cast their ballot.

People have to present ID to cash a check, buy a beer, test drive a car, and sign their children out when they get picked up for day care.

Why does Eric Holder think casting a ballot to elect local, state, and national leaders is so much less significant?