Notice: Function add_theme_support( 'html5' ) was called incorrectly. You need to pass an array of types. Please see Debugging in WordPress for more information. (This message was added in version 3.6.1.) in /home/kj8d9sfz7jzn/public_html/federalistpress.com/wp-includes/functions.php on line 5831
 VP Debate Turns Bizarre 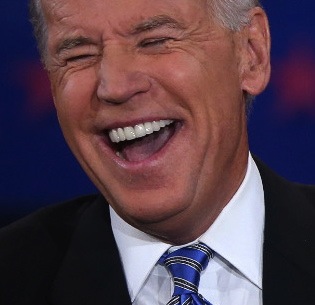 The vice presidential debate between VP Joe Biden and GOP challenger Paul Ryan was anticipated by liberals as the party’s opportunity for payback following the spanking their fearless leader took in the first presidential debate last week at the hands of Mitt Romney. Feeling that Obama had simply failed to put in the necessary time to adequately prepare for the debate, Joe Biden was removed from the campaign trail and sequestered in debate rehearsal for nearly a week.

The VP debate was moderated by ABC News political correspondent and Obama cronie, Martha Raddatz. If one were to read a sterilized transcript of the debate, he would come away with the impression that each candidate expressed his party’s view on the issues presented by Radditz, and that there was no reason to think that bias or chicanery played a major role in the debate.

For those of us who watched the debate on television, however, that’s not how the evening went. In fact, Radditz ran interference for Biden all evening, tossing him underhanded pitches and assisting him to make clarifications, while interrupting and cutting off Paul Ryan a total of 82 times while he attempted to make his points, and allowing Biden to do the same more than 30 times. Overall, Biden was afforded a minute and a half more talking time than Ryan.

During the entire debate Biden laughed, smirked, scoffed, grunted, snorted and chuckled during Ryan’s speaking time in an animated and exaggerated display. The behavior was not only unbecoming the office of the Vice President, but would have been considered reason for being kicked off even a high school debate team. One must wonder why the VP and his debate coaching team made a conscious decision to have him carry on in such a disturbing and unprofessional manner, especially when they well knew that the broadcast would provide a split screen view to the 54 million viewers.

Although one could argue that each candidate adequately delivered his ticket’s respective message, conservative and leftist, the debate will go down in history as one of the most bizarre displays of strange behavior by a sitting vice president, bordering on drunken and obnoxious.