Notice: Function add_theme_support( 'html5' ) was called incorrectly. You need to pass an array of types. Please see Debugging in WordPress for more information. (This message was added in version 3.6.1.) in /home/kj8d9sfz7jzn/public_html/federalistpress.com/wp-includes/functions.php on line 5831
 Washington Post and New York Times have Dropped all Pretense, Out to destroy both Trump and Conservative Movement 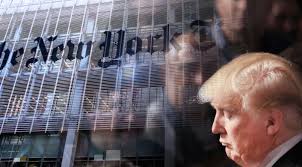 This weekend, the NY Times will publish a front-page story on former Donald Trump advisor Paul Manafort. Can you guess what shocking revelation the Times will be sharing with its readers? No doubt it will highlight Manafort’s long-time business activities in Russia, and close with a comment from another ubiquitous anonymous source, reminding the reader that the justice Department is investigating certain Trump advisors and their “alleged” contact with Russians during the 2016 Campaign. You can be sure that the Times article will not mention that this investigation, which is becoming more disturbing everyday, has yet to find the slightest bit of evidence indicating wrong-doing on the part of Trump or his staff. Between the Washington Post and the Times, its beginning to appear as if these two once-respected newspapers are taking turns, publishing stories about Trump advisors or cabinet members, which provide nothing but the same basic allegation, dressed up with the all-important comment from the secret source. Currently, journalists in DC seem to have an endless supply of inside government sources. At first, these leakers caused a firestorm by providing the Associated Press and others with the identity of three Trump advisors or confidants who had met with Russian government officials during the campaign. What should be most disturbing is the willingness of the AP, the Post and the Times, to print information which is obviously classified and illegally obtained.

If the FBI or another government entity finds it necessary to surveille and “listen in” to the conversations of foreign nationals, occasionally that effort will pick up the identity and incidental comments of U.S. citizens as well. Whoever has been given the authority to collect intelligence on the foreign national is required by law to mask the identity of any U.S. citizen who has “inadvertently” picked up in conversation. Before the FBI or whoever are allowed to start the surveillance operation which might involve a U.S. person, they are required to obtained FISA (Foreign Intelligence Surveillance Act) authority from a Judge. Trump’s nominee for Attorney General Jeff Sessions and advisor Michael Flynn were picked up during a FISA-approved collection effort. How can we know this?  Because an anonymous source, probably within the Justice Department, provided this information to a journalist. First and foremost, only a select number of people in Washington DC are supposed to have “unmasking” authority. One of these individuals unmasked both Sessions and Flynn, which gave the media the opportunity to create a firestorm of innuendo and unproven allegations regarding both Trump and Flynn. I have yet to hear one Democratic Congressperson express concern regarding the unmasking of U.S. citizens.

Some things in life are guaranteed. Ice is cold, kittens are irresistible, and the American people have no faith in the mainstream media. Have you noticed that since the GOP has taken over both the Senate and the House of Representatives, the media is anxious to publicize any and all polls that illustrate Congress’ low approval rating? At the same time, you will rarely see poll results on CNN, MSNBC, ABC, or CBS that highlight the complete lack of trust the American people have for the mainstream media. Regardless, journalists continue to have no clue. Even after the fiasco of anointing Hillary Clinton as the winner of the 2016 election while the Campaign was still in full-swing, the media remain convinced of their intellectual superiority over almost all Americans (they probably rank themselves somewhere just below tenured Ivy League Professors). This knowledge burdens them with the heavy responsibility of editorializing every piece of news. From where they stand, the job of a journalist is not only to report the news, but to do so in a selective and nuanced fashion, ensuring that the audience comes away with the “correct perspective.” For the press, the fact that no evidence exists connecting Trump advisors and staff to alleged Russian efforts to impact the 2016 Presidential Campaign, makes it imperative that the American people are reminded, ad nauseam, that the Justice Department has not completed its investigation into this matter.