Notice: Function add_theme_support( 'html5' ) was called incorrectly. You need to pass an array of types. Please see Debugging in WordPress for more information. (This message was added in version 3.6.1.) in /home/kj8d9sfz7jzn/public_html/federalistpress.com/wp-includes/functions.php on line 5831
 Washington Post Calls Susan Rice a Liar on Syria Chemical Weapons

Former Obama official Susan Rice’s claim just a few months ago that the Assad regime “voluntarily and verifiably” gave up its chemical weapons stockpile earned a full rebuke from a prominent fact-checker on Monday in the wake of last week’s chemical attack. 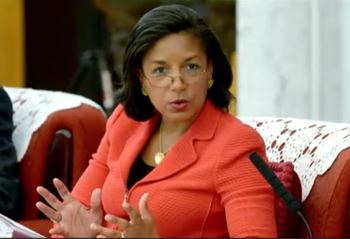 The Washington Post fact-checker gave the former national security adviser a rating of “four Pinocchios” — the worst rating on their truth scale.

“The reality is that there were continued chemical-weapons attacks by Syria,” the Post wrote.

This was after another fact-checking outfit, PolitiFact, retracted its “mostly true” rating for a 2014 claim from then-Secretary of State John Kerry that “100 percent” of those weapons were removed from Syria.

Rice’s claim, however, was more recent. In January, she told NPR that the Obama administration was able to “find a solution” on Syria that didn’t require the use of force – and still dealt with the chemical weapons threat, using diplomacy.

“We were able to get the Syrian government to voluntarily and verifiably give up its chemical weapons stockpile,” she claimed.

Then came last week’s attack that killed dozens and that the U.S. suspects involved sarin nerve gas. The strike prompted President Trump to launch missiles late last week against the base suspected of being used to carry out the attack.

Rice’s comments about the 2013 agreement to purge the Assad regime’s chemical weapons quickly were called into question, along with the claims of other Obama officials.

The Washington Post noted, “the Obama administration had a tendency to oversell what was accomplished, perhaps because Obama received so much criticism for not following through on an attack if Syria crossed what Obama had called ‘a red line.’”

“The reality is that there were continued chemical-weapons attacks by Syria — and that U.S. and international officials had good evidence that Syria had not been completely forthcoming in its declaration and possibly retained sarin and VX nerve agent,” the Post wrote.

Citing Rice’s exact words, the fact-check column ruled: “She did not explain that Syria’s declaration was believed to be incomplete and thus was not fully verified — and that the Syrian government still attacked citizens with chemical weapons not covered by the 2013 agreement. That tipped her wordsmithing toward a Four.”