Notice: Function add_theme_support( 'html5' ) was called incorrectly. You need to pass an array of types. Please see Debugging in WordPress for more information. (This message was added in version 3.6.1.) in /home/kj8d9sfz7jzn/public_html/federalistpress.com/wp-includes/functions.php on line 5831
 Whistle-Blower: US Military Response Would Have Stopped Benghazi Attack 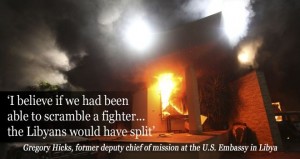 The U.S. military could have prevented one wave of the deadly attack on American personnel in Benghazi if fighter jets had been promptly deployed, a top diplomatic official who was in Benghazi during the Sept. 11 assault told congressional investigators.

The account, contained in a transcript obtained by Fox News, was given by Gregory Hicks during an interview last month with the House Oversight and Government Reform Committee. Hicks, a whistle-blower who is preparing to testify Wednesday before that committee, was deputy chief of mission at the U.S. Embassy in Libya — after Ambassador Chris Stevens was killed that night, he became the highest-ranking diplomat on the ground.

Hicks, in his interview, argued that after the first wave of attacks on the U.S. consulate, the U.S. military could have prevented additional violence with a quickly scrambled flight — after the first wave, terrorists would go on to launch a pre-dawn mortar assault on the CIA annex.

“And so, in my personal opinion, a fast-mover flying over Benghazi at some point, you know, as soon as possible might very well have prevented some of the bad things that happened that night,” Hicks said, according to the transcript.

He acknowledged that this would have required clearance from the Libyan government, since it is their airspace, but claimed the government would have approved such a flight.

This, he said, could have stopped that mortar assault.

“I believe if we had been able to scramble a fighter or aircraft or two over Benghazi as quickly as possible after the attack commenced, I believe there would not have been a mortar attack on the annex in the morning because I believe the Libyans would have split,” he said. “They would have been scared to death that we would have gotten a laser on them and killed them.”

Hicks suggested the Libyan government expected a request to use their airspace, and claimed the Libyans “were as surprised as we were” that U.S. military personnel did not arrive until later on.

Pentagon officials have said military assets were not in position to respond fast enough that night, and also have cautioned about the potential risks of sending additional military into the area.

“There was not enough time given the speed of the attack for armed military assets to respond,” former Defense Secretary Leon Panetta testified before the Senate Armed Services Committee in February. “We were not dealing with a prolonged or continuous assault which could have been brought to an end by a U.S. military response. … Time, distance, the lack of an adequate warning, events that moved very quickly on the ground prevented a more immediate response.”

Panetta, during an Oct. 25 briefing with reporters, also said that while the military was prepared to respond, the “basic principle is that you don’t deploy forces into harm’s way without knowing what’s going on.” He said the attack was over before “we had the opportunity to really know what was happening.”

Hicks acknowledged there were concerns that the nearest fighter jets did not have the requisite tankers in the area to support a flight.

However, he said a second rescue team that was supposed to go from Tripoli to Benghazi early that morning was told not to go.

He said Special Forces personnel were planning to board a C-130 flight at around 6 a.m. local time on Sept. 12.

“We fully intended for those guys to go, because we had already essentially stripped ourselves of our security presence, or our security capability to the bare minimum,” he said.

But he said the military team on the ground in Tripoli got a phone call when they were on their way to the flight telling them “you can’t go now, you don’t have authority to go now. And so they missed the flight.”

He added: “They were told not to board the flight, so they missed it,” apparently because they did not have the “right authority.”

The account is one of a series of new details and claims that are emerging about the night of the Benghazi attack in advance of congressional testimony.

Mark I. Thompson, a former Marine and now the deputy coordinator for operations in the agency’s counterterrorism bureau, has also claimed that then-Secretary of State Hillary Clinton and a key aide effectively tried to cut the department’s own counterterrorism bureau out of the chain of reporting and decision-making that night. He, too, is set to testify Wednesday.

Sources close to the congressional investigation who have been briefed on what Thompson will say tell Fox News the veteran counterterrorism official concluded on Sept. 11 that Clinton and Under Secretary for Management Patrick Kennedy tried to cut the counterterrorism bureau out of the loop as they and other Obama administration officials weighed how to respond to — and characterize — the Benghazi attacks.

Daniel Benjamin, who ran the department’s Counterterrorism Bureau at the time, also put out a statement Monday morning strongly denying the charges.

“I ran the bureau then, and I can say now with certainty, as the former Coordinator for Counterterrorism, that this charge is simply untrue,” he said. “Though I was out of the country on official travel at the time of the attack, I was in frequent contact with the Department. At no time did I feel that the Bureau was in any way being left out of deliberations that it should have been part of.”

He went on to call his bureau a “central participant in the interagency discussion about the longer-term response to Benghazi.” He said “at no time was the Bureau sidelined or otherwise kept from carrying out its tasks.”

Separately, a senior State Department official told Fox News that Hicks and Thompson both have “axes to grind.”