The White House is retreating from its doomsday predictions about the impact of the $85 billion in federal spending cuts as they enter a second week — with Republican leaders appearing at least satisfied about delivering on their promise to limit government spending and hold down taxes. 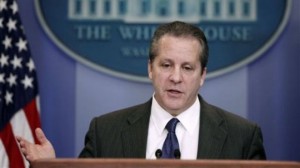 Gene Sperling, the White House’s top economic adviser, repeatedly said Sunday the cuts will not hurt as much on “Day One” as they will over the long haul.

“Nobody ever suggested that this … was going to have all its impact in the first few days,” he told “NBC’s “Meet the Press.” “It is a slow grind.”

His remarks are in contrast to weeks of President Obama and his Cabinet warning that the cuts will result in furloughs or pay cuts for middle-class wage-earners such as teachers, Capitol Hill janitors and air traffic controllers, which they said could cause 90-minute delays at major U.S. airports.

Sperling declined at least twice to directly answer questions about whether the worst-case-scenario rhetoric has hurt the president’s credibility on the issue. He instead stuck to his argument that independent economists forecast the cuts will result in 750,000 fewer jobs and that corporate executives now anticipate slower economic growth.

“This modest reduction of 2.4 percent in spending over the next six months is a little more than the average American experienced just two months ago, when their own pay went down when the payroll tax holiday expired,” the Kentucky Republican said.

Congress agreed to the cuts, known as sequester, in 2011 after failing to agree on more measure reductions — to defense and some domestic spending. However, the cuts were intended to be so drastic that Democrats and Republicans would be forced to compromise before they started.

Still, Sperling rejected several Republican-backed plans and said no compromise would be reached unless the party agrees to tax increases.

Sen. Kelly Ayotte, R-N.H., responded by saying Congress agreed to such increases in January “at the president’s request” and questioned why Obama and other Democrats will not agree to additional spending cuts.

She argued for potential pay freezes for federal employees and reforms to the federal food stamps program.

“There’s a whole host of ideas to cut spending” without jeopardizing security, Ayotte said on ABC’s “This Week.”

However, she also said she would consider tax reform that comes with entitlement reforms. But she would not agree to revenue increases to pay for additional government spending.

Earlier on the show, Sperling said Republican strategy is flawed because the cuts will take resources from several of the party’s most valued positions — including national defense and border security.

“This is not a win for Republicans,” Sperling said. “This cuts into military preparedness.”

He hinted Sunday at Democrats’ likely strategy for retaking the House in 2014.

“Our hope is as more Republicans start to see this pain in their own districts, they will choose bipartisan compromise over this absolutist position,” he said.

Sperling also dismissed a plan backed by at least some Republicans to give the president some flexibility in the cuts.

“It’s like saying you have to cut off three of your fingers but you can choose which ones,” he said.

Sperling also addressed an email sent to Bob Woodward in which he said The Washington Post reporter might “regret” writing a story that said Obama has “moved the goal posts” on sequester.

He told ABC that he and Woodward share a mutual respect and he hopes they can “put this behind us.”

All of this comes ahead of a new, March 27 deadline that could spell a government shutdown and a debt-ceiling clash coming in May.

House Speaker John Boehner said his chamber would move this week to pass a measure to keep government open through Sept. 30.

McConnell said a government shutdown was unlikely to come from his side of Capitol Hill. The White House said it would dodge the shutdown and roll back the cuts, which hit domestic and defense spending in equal share.

Sperling said the White House is committed to trying to find a way that Republicans and Democrats can reach a compromise.

The billions in cuts apply to the remainder of fiscal 2013, which ends Sept. 30. But without a deal they will continue slashing government spending by about $1 trillion more over a 10-year period.