Notice: Function add_theme_support( 'html5' ) was called incorrectly. You need to pass an array of types. Please see Debugging in WordPress for more information. (This message was added in version 3.6.1.) in /home/kj8d9sfz7jzn/public_html/federalistpress.com/wp-includes/functions.php on line 5831
 Who’s to blame for sequestration frustration?

Reprinted from Your World, Neil Cavuto

The president laying the blame for this sequestration frustration, on Republicans blocking everything in creation.

They allowed these cuts to happen, not him, who did everything in his power not to let them happen. 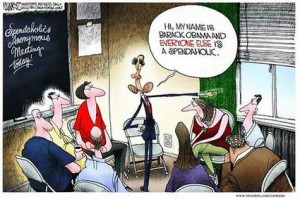 They’re stubborn for not wanting tax hikes, because they’ve already given in on taxes in a prior deal. He’s not stubborn for suddenly wanting to include tax hikes, even though Bob Woodward confirms, they weren’t supposed to be part of this deal.

Republicans are playing games by always bringing these things to the brink. But he’s not by holding a hastily arranged PR meeting with them at the White House on the day we hit the brink.

Look, I understand, each side is entitled to its agenda. But neither side is entitled to its own set of facts. Because the fact is Republicans didn’t come up with sequestration as a back-up plan. The president did. And the fact is Republicans didn’t scare the nation into thinking we’d all be eating horsemeat because beef inspectors would start disappearing. The president did. Even though he knew beef inspectors would not start disappearing.

It just amazes me to hear the president today joke about others who say an apocalypse will come, when he was the guy who all but said the apocalypse was here.

If memory serves me right wasn’t the president the one who said our airport security was hanging in the balance?

Wasn’t he the one who stood in front of firemen and policemen, whose jobs he said were at stake, even though they aren’t paid by the federal government, so they can’t be at stake?

Wasn’t his education secretary the guy who had to take back that, tens of thousands of teachers’ jobs lost line?

And his homeland security secretary the one who said our border security was on the line?

Over the line. Over the top.

It takes two to tango.

And if you’re going to say republicans won’t compromise, even though they already did on taxes, would it kill you to say the same of Democrats, who have yet to budge on spending?

Leaving aside 85 billion in cuts in a $3.8 trillion budget is chicken feed, hearing this lopsided, one-sided, hopelessly blind-sided approach to facts that is just chicken… fit.