Notice: Function add_theme_support( 'html5' ) was called incorrectly. You need to pass an array of types. Please see Debugging in WordPress for more information. (This message was added in version 3.6.1.) in /home/kj8d9sfz7jzn/public_html/federalistpress.com/wp-includes/functions.php on line 5831
 Why Catholics and Jews Should Support Romney 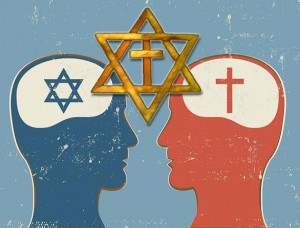 President Barack Hussein Obama’s open war on Christianity was officially launched less than three months into his presidency on April 15, 2009, when he insisted that the gold “IHS” monograms for the name of Christ be covered up with black painted plywood in Gaston Hall at the Catholic church’s Georgetown University, where he delivered a speech on economics.

Since then Obama and his party have done everything in their power to undermine the Catholic Church’s moral stance on birth control and abortion — attempting to force Catholic institutions and people to accept the administration’s edicts about providing these morally abhorrent services (in the Catholic view) to employees and beneficiaries of their institutions and organizations.

Of course, Barack Obama has always been hostile toward Christianity, and Christian principles, championing anti-Christian causes like gay marriage (although he flipped against it for a few years to get elected, then recently flipped back to rally his base), abortion (which has eliminated tens of millions of American blacks from our population), the poverty and servitude of debt and the government dole, and general principles of immorality (yes, Christianity teaches virtue and honesty). Although he claims to be Christian, when it serves him, his professed brand of “Christianity” is a Black Liberation Theology, which has its roots in Marxism–an anti-Christian philosophy.

Obama has likewise taken draconian stands against one of America’s greatest allies — the State of Israel.  Earlier this week Obama snubbed Israel’s Prime Minister Benjamin Netanyahu — as he has done before. The president has thrown Israel and the Jewish people under the bus on several occasions during his first term in the White House, siding with Muslims on nearly every international issue — while they protest America and riot 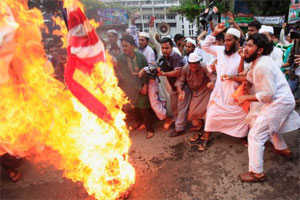 in nearly every nation, murder our diplomats, and spit in our face — yet American Jewish people continue to support his presidency.

So what is the appeal of a leftist president to American Jews? On paper, there should be none — Jewish people tend to be much more self-reliant and ambitious than most ethnic or religious minorities, and not a good prospect for the democratic siren’s song of the Rainbow Coalition. However, a quick look at American Jewish voting patterns demonstrate that they have supported every “progressive” candidate since Woodrow Wilson. The probable reason for their leftist bent is their countries of origin. Indeed, most Jewish people originated from socialist countries, and even the State of Israel was established as a socialist nation in its infancy. Add to this their persecuted status when they arrived in America, and the persecuted people outreach programs of the left during the 19th Century, and you end up with left-leaning multi-generational voters.

To a lesser extent, the left gathered American Catholics into their tent in the same way they did Jews and Blacks–all of whom they had persecuted and oppressed during the post-Civil War years (see our article True Champions of American Blacks, May 16, 2012), by first convincing them of their minority or non-normal status, and second, by offering them special protection in exchange for their sovereignty and their votes.

The time has come for Americans of every race and religion to come to the realization that selling their souls to the democratic party in exchange for empty promises has brought them nothing but disdain and reviling. It’s time for American Jews, Blacks, Catholics, Hispanics, Mormons, and every other category of citizen to realize that they are just Americans, without hyphenation or special status. Selling one’s soul to the devil never works out the way he promised.