Notice: Function add_theme_support( 'html5' ) was called incorrectly. You need to pass an array of types. Please see Debugging in WordPress for more information. (This message was added in version 3.6.1.) in /home/kj8d9sfz7jzn/public_html/federalistpress.com/wp-includes/functions.php on line 5831
 Why is the Trump Admin Still Prosecuting AZ Sheriff Joe Arpaio for Enforcing Immigration Law? 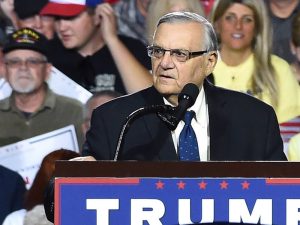 Maricopa County Sheriff Joe Arpaio was formally charged with criminal contempt of court, with liberal Obama prosecutors saying he disobeyed a liberal judge’s order by detaining illegal aliens in his county after being told to look the other way. The sheriff for much of the Phoenix metro area could face up to six months behind bars if convicted.

So we would like to know why, after Donald Trump became the president, and Jeff Sessions the Attorney General, is the government continuing its case against Sheriff Arpaio? During the entire Obama administration, Sheriff Joe Arpaio stood firm against the administration’s ‘catch and release’ policy, which bludgeoned local law enforcement into ignoring the immigration laws of the United States. Sheriff Arpaio continued to enforce the law as it stood on the books, and to a large extent ignored illegal threats from the Obama administration, resulting in the current legal action against him.

President Trump and Attorney General Sessions should instruct prosecutors to drop the case immediately, and Sheriff Joe Arpaio should be invited to the White House and given a medal for his long history of service to the nation, the State of Arizona, the County of Maricopa, and for his relentless defense of abused animals.

James Thompson is a writer and ghostwriter, and a political analyst.