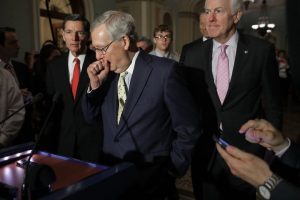 The more liberal a person, the more he tends to run with the pack. The more conservative, the more individualistic he tends. When it comes to governance, the pack animals stick together better than the mavericks.

Look at the cities in our nation–they are concentrations of democrats. They readily surrender their individual sovereignty to their democratic leaders in exchange for perceived security. It is the people in the less populated suburban and rural regions that vote republican, and they prefer to maintain their personal sovereignty and look upon government with mistrust.

Why is this? There appears to be a dichotomy of personality types, and like animals, they tend toward those who prefer to run with the pack, and those who prefer a more solitary existence. The pack animals, like wolves, hunt together, and glut on the efforts of their entire society, rarely depending on their own personal efforts for every meal. Sound familiar?

Other species, like birds or bears, prefer to live in smaller groups, focused on close family relationships rather than packs. These are the republicans.

The very characteristics that render republicans enviable in their personal lives–independence, sovereignty, self-determination–makes it difficult for them to come together in a unified purpose and pass sweeping legislation, even when they all understand how important the legislation is.

Democrats stick together, and all read off of the same talking points, in unison–like a Chinese acrobatic team. They have very few defectors when they propose a point of legislation. They do not turn on each other, and if one strays from acceptable behavior, they all band together and surround the offender and protect him from his own stupidity.

Republicans do none of these things. They are the first to turn on one of their own, and the last to adopt the party line.

For these reasons, Democrats are much more able to legislate and govern. Of course, their governance is flawed, and cuts against the principles of our Constitution–a governing document constructed by political conservatives. Republicans are poor at providing governance, because they fail to get together absent a leader who brings them together. Unfortunately, we have not had such a leader since Newt Gingrich penned the GOP’s Contract With America and led the Republican party to victory in the House, and forced Bill Clinton to support several important laws.

Mitch McConnell and Paul Ryan are not anything approaching Newt Gingrich.

James Thompson is a ghostwriter who writes books for many political and business leaders.