Notice: Function add_theme_support( 'html5' ) was called incorrectly. You need to pass an array of types. Please see Debugging in WordPress for more information. (This message was added in version 3.6.1.) in /home/kj8d9sfz7jzn/public_html/federalistpress.com/wp-includes/functions.php on line 5831
 WikiLeaks’ Assange: ‘Our Source is not the Russian Government’ 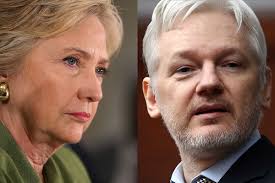 “Our source is not the Russian government,” Assange told “The Sean Hannity Show.”

“So in other words, let me be clear,” Hannity asked, “Russia did not give you the Podesta documents or anything from the DNC?”

Assange’s assertion contradicts the Office of the Director of National Intelligence (ODNI), which concluded in October that “the Russian Government directed the recent compromises of e-mails [sic] from U.S. persons and institutions, including from U.S. political organizations.”

In addition to the hacked emails from the DNC and Podesta, Assange admitted that Wikileaks received “received about three pages of information to do with the [Republican National Committee]  and Trump [during the campaign], but it was already public somewhere else.”

Late Thursday, the Wall Street Journal reported that Russian hackers had tried and failed to access the RNC using the same methods as the DNC hackers.

Assange had previously denied that the DNC and Podesta emails had came from any government. He has steadfastly refused to identify the source of the messages.

“We’re unhappy that we felt that we needed to even say that it wasn’t a state party. Normally, we say nothing at all,” Assange told Hannity. “We have … a strong interest in protecting our sources, and so we never say anything about them, never ruling anyone in or anyone out.

“And so here, in order to prevent a distraction attack against our publications, we’ve had to come out and say ‘no, it’s not a state party. Stop trying to distract in that way and pay attention to the content of the publication.’”

Assange added that the U.S. government, corporations and even private citizens are vulnerable to a cyberattack like the one on the DNC and Podesta.

“Everything is almost completely insecure now,” he said. “Computer systems have become so complex that it is not possible to understand all the parts, let alone secure them. It’s just impossible.”