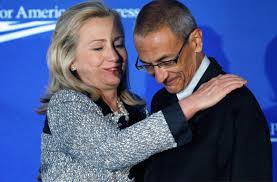 Here’s a rundown of what’s been revealed so far from the continuing release by Wikileaks of Clinton campaign emails. (This is an update of an earlier compilation.)

What is in the latest Wikileaks email dump?

For the last several weeks, the website Wikileaks has been publishing emails from the private Gmail inbox of John Podesta, a senior Democratic Party official who has served in a variety of senior positions. Mr. Podesta served as White House chief of staff under President Bill Clinton, a senior adviser to President Barack Obama and is currently serving as the chairman to Hillary Clinton’s presidential campaign.

How many emails are involved? Are there more coming?

Wikileaks says that it is in possession of about 50,000 of Mr. Podesta’s emails. So far, the group has published about 33,000 emails, in batches of a few thousand a day. Campaign officials are bracing for ongoing releases through Election Day, though Wikileaks has not “confirmed a release schedule.” Mrs. Clinton’s campaign has refused to confirm or deny the authenticity of the hacked documents.

How did Wikileaks get the emails?

The Federal Bureau of Investigation suspects Russian intelligence agencies are behind the hack and provided them to Wikileaks, according to people briefed on the investigation. It’s not the first time that actors linked to the Russian government have hacked political email accounts: Emails and documents belonging to Democratic Party officials have been released in the past few months, including one batch that forced the resignation of the head of the Democratic National Committee.

What have we learned?

Interspersed in the emails are plenty of personal gossip — showing feuds and divisions within Mrs. Clinton’s circle and personal disagreements between staffers and the Clinton family, as well as controversial exchanges about Catholics and CNN debate questions. And some have been more lighthearted: emails show the depth of Mr. Podesta’s well-document interest in UFOs and capture him giving advice on how to cook risotto.

Some of the main takeaways:

Mrs. Clinton’s top advisers were divided about what she should do on the Trans-Pacific Partnership, with some fearing that opposition to the trade pact would look like a blatant “flip-flop.” On Oct. 8, 2015, Mrs. Clinton said she opposed the trade pact, a position that proved helpful in keeping her coalition intact and beating back a primary challenge from Vermont’s liberal senator, Bernie Sanders.

The emails show there were close ties between Mrs. Clinton’s presidential campaign and top Democratic Party officials long before she wrapped up the nomination, despite a longstanding mandate that the national party remain neutral in intraparty fights.

Mrs. Clinton’s political team sought to contain any potential fallout over her use of a private email server by communicating with government agencies, enlisting help of congressional allies and managing public statements

The emails also show Mrs. Clinton’s advisers and allies prodding the former secretary of state to apologize for using a private email server and acknowledging her reluctance to admit mistakes.

The emails reveal deep divisions within Mrs. Clinton’s political circle about the handling of the controversy over her use of a private email server when she was secretary of state, with some upset that the arrangement wasn’t publicly disclosed far earlier.

Clinton aides chewed over campaign messages large and small as she moved through the Democratic primary and into the general election showdown with Republican rival Donald Trump. The emails underline Mrs. Clinton’s image as a highly scripted, deeply cautious candidate.

In a trio of paid talks before she entered the presidential race, Mrs. Clinton took on a more pro-business persona that Democratic voters typically saw as she pursued the party nomination. In what appear to be transcripts of her comments at the events in 2013, which were underwritten by Goldman Sachs Group Inc., Mrs. Clinton spoke about the importance of free trade, sounded a skeptical note about financial regulation, and said the political system would benefit if more “successful business people” ran for public office. During the campaign, she cast herself as a committed populist fully prepared to jail Wall Street bankers.

An email sent by Chelsea Clinton in 2011 pointed to discord within the Clinton Foundation and bitter tensions inside the network of Clinton associates and aides.