Notice: Function add_theme_support( 'html5' ) was called incorrectly. You need to pass an array of types. Please see Debugging in WordPress for more information. (This message was added in version 3.6.1.) in /home/kj8d9sfz7jzn/public_html/federalistpress.com/wp-includes/functions.php on line 5831
 Wisconsin Unplugs the Machine 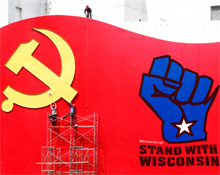 Wisconsin is a state like many others in the Midwest, home to working people just trying to live the American dream. In recent decades the state has been heavily influenced by unions, with Democratic political leaders striking sweetheart union deals in the tradition of leftist politics. The scheme is similar to the Harry Hopkins political plan—Tax, Spend, Elect!—only with a middleman inserted between the politician and the treasury; the union boss.

Indeed, like so many states that have handed the reins of government over to union bosses, Wisconsin has become the poster child for union/government collusion to drain the public coffers through graft, corruption, and mandated inefficiency and waste. With a $3.6 billion budget deficit hanging over the state’s head, Wisconsin voters found themselves backed into a corner, and forced to make the ultimate hard choice—vote in a Republican governor to clean up after the party thrown by the Democrats.

Sure, nearly everyone liked things the way they were. High taxes, government over-regulation and unions siphoning the profits off the state’s economy served the purposes of those receiving the money—namely, union bosses, Democratic politicians and their capitalist cronies. They went out every political season and sold their scam to the public, telling them that the “working people” were getting their piece of the pie, and that as long as the status quo was enforced, no one would get hurt.

The $3.6 billion deficit changed the status quo, however, and the voters had to face the reality of the union/government scam. Reluctantly, they 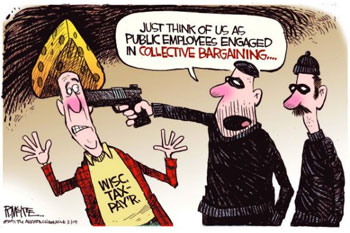 brought in Governor Scott Walker and allowed him to do the job that responsible government must do. He and his bare majority in the state capital passed legislation that stripped the most egregious abuses of power from union boss hands. The uproar was heard around the state as militant union thugs “occupied” the capitol building and the streets, while Democrat senators left the state en masse during session to rob the legislature of a quorum to pass its initiatives.

This temper tantrum resulted in tens of millions of dollars in damage to the state, and a recall effort against those who had dared stand up to the corruption that had taken over Wisconsin.

Last night the people of the state spoke. Indeed, in the mere year since Governor Walker and new bare-majority passed their demonized legislation, we discover, yet again, that Republican reality saved the day for Wisconsin, and the crushing debt was eliminated, and tens of thousands of new jobs created.

The political machine that took over our country when unions were allowed into the public employee realm is beginning to cough and sputter. As other states take heart and begin to pull the plug on union/government collusion, we will see similar results—good for states and citizens, and bad for union bosses and Democrats who rely on their forced dues kickbacks to fund populist campaigns.

The Silent Majority is back, and it is taking back its country. The next stop? Washington, D.C., and its union run Democratic Party bosses. We might even take the unions out of teaching, and get our children the educations we are paying for.